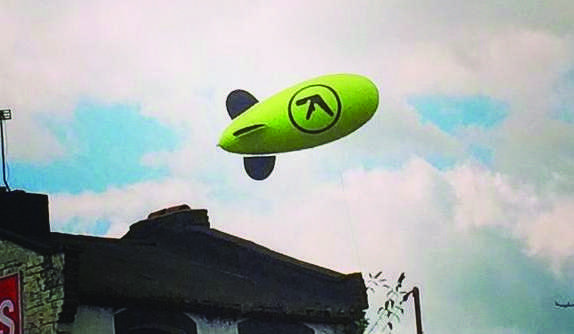 One morning in August, a green zeppelin appeared floating over London. There was no explanation as to this bulbous object’s existence, except for a symbol in black on the side of the blimp. Soon after, it was revealed to be the symbol synonymous with clandestine electronic musician Aphex Twin.

As various online music publications pounced on this new activity, it was revealed that the blimp signified a new release for the artist, who has been largely absent from the music world since 2001’s Drukqs. The new album, Syro, is comprised of music from the 13 years that have passed since then.

In a recent interview with Pitchfork, Richard D. James, the man behind Aphex Twin, spoke of each track being composed and produced in a completely reassembled studio environment. This speaks to James’ meticulous production style, which is very much reflected in the new album.

Intricate production and composition pervade Syro on every track, showcasing the glitch musical style that we have come to expect from Aphex Twin’s music. Even with its stuttering beats, Syro is a far cry from Drukqs, which approached electronic music with far harsher, experimental textures.

While James himself has said that this album is “not very innovative” in the large scale, it approaches familiar Aphex Twin music with different elements representing the changes in his life. For example, now that he has a family, his children and wife’s voices are heard in various parts of the album.

This in particular gives the album a very warm, approachable character that has not been heard yet on an Aphex Twin album due to his reclusive nature.

The album begins with a track called “minipops 67 (source field mix),” a title that sounds like it would be more at home in a physics textbook than a music album. The rest of the track titles are similar in their suggested complexity and cryptic nature. In that regard, the titles describe the songs pretty well. The music on Syro is complex and consistently interesting from track to track.

There is an eerie vibe throughout the album that gives it consistency, even though the tracks were produced in different studio environments. That alone gives praise to James as a producer – he is able to craft an overarching statement despite each track being composed and recorded in a completely different situation.

Tracks like “XMAS_EVET10 (Thanaton3 Mix)” show his experimentation with complex rhythms in a multi-part piece of music, which clocks in at over 10 minutes. Other tracks like “CIRCLONT6A (Syrobonkus Mix)” and “Produk 29” showcase new experimentations with jazz and funk-like textures, which hasn’t yet been seen in Aphex Twin music.

The one critique I would make of this album would be, though it is a vastly satisfying album, it isn’t nearly as mind-blowing as one would expect an album to be after a 13-year build up. There are sounds and styles on this album that haven’t been heard from Aphex Twin before, but as a whole, it shares significant ties with albums that he has made in the past (in both his palette of sounds and his implantation of rhythm). Coming from any other electronic artist, this would be a justified leap, but knowing Aphex Twin as the innovator that he is, I expected more of a 180-degree turn.

That being said, it doesn’t impede my enjoyment of the album. Syro is a very consistent work of art in the electronic field, being constantly interesting and lacking the stagnant repetition that characterizes a lot of dance music.

In the same interview with Pitchfork, James has said he’s already locked onto new sounds and ready to move on to a new, more innovative chapter of his music. We all have a lot to look forward to.