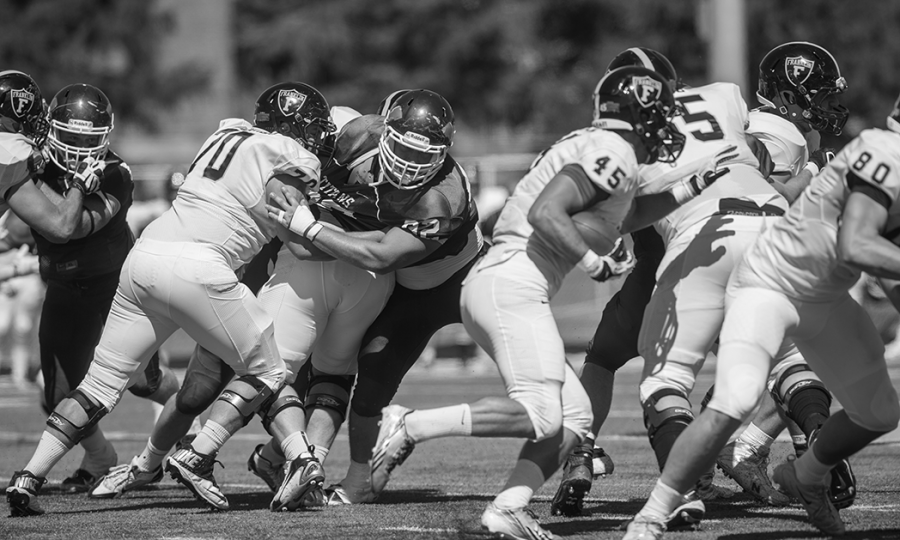 On Saturday, Sept. 20, the Illinois Wesleyan University football team suffered its first loss of the season to regional foe Simpson College.  The loss broke a remarkable 22-game winning streak dating back to Sept. 15, 2007.

The loss can be credited to Simpson’s strong performance but also to the Titans inability to capitalize on crucial opportunities.  Despite leading the game total offensive yards (347), IWU offense left three first-half red zone opportunities on the table, scoring only on a field goal.

First-year quarterback Jack Warner continued to perform – throwing for 282 yards on 28 completions.  Warner also accounted for 47 of the Titans’ 65 rushing yards. Warner made elite company among other athletes in IWU history, securing 28 completions in a single game as well as third-most completions over all IWU football games. In addition, Warner’s 46 pass attempts tied eighth of all-time.

“Jack has been really solid so far.  Coming in and starting as a first-year would make most people nervous, but he seems very calm and collected back there,” said sophomore linebacker Adam O’Grady.

Warner had some help from junior wide receiver Andrew Javorka, who had 14 receptions for 150 yards. Javorka puts himself fifth on the all-time list for receptions in a game. While there are four past players ahead of Javorka on this list, they are all tied for the most receptions in a game, making his 14 grabs the second most in IWU football history.

The Titan defense was outstanding once again, as Tyrell Bolden and Kevin Slawkowski each had an interception to go along with a strong performance from the linebackers.

Although the defense was able to hold Simpson to only 13 points on the game, they didn’t receive the scoring support they needed to get the victory. IWU’s only points came from a 41-yard field goal by Michael Kelley in the fourth quarter.  Kelley, a junior from Carbondale, Illinois, was named the College Conference of Illinois and Wisconsin “Special Teams Player of the Week” on Monday, Sept 22.

Looking forward, the Titans will be looking to relight the offensive flame of the past two games, where they put up 42 and 35 points, respectively.

Resurgence in scoring and continued strong play from the defense will make the Titans a very tough team to beat.

With a bye this weekend, the Titans will take on Carthage College on Saturday, Oct. 4 at 6:00 p.m. at Tucci Stadium. Saturday will be the only regular season night game for the Titans, which should offer a unique environment for the match-up. Come out and support them as they look to improve their record to 3-1 on the season.